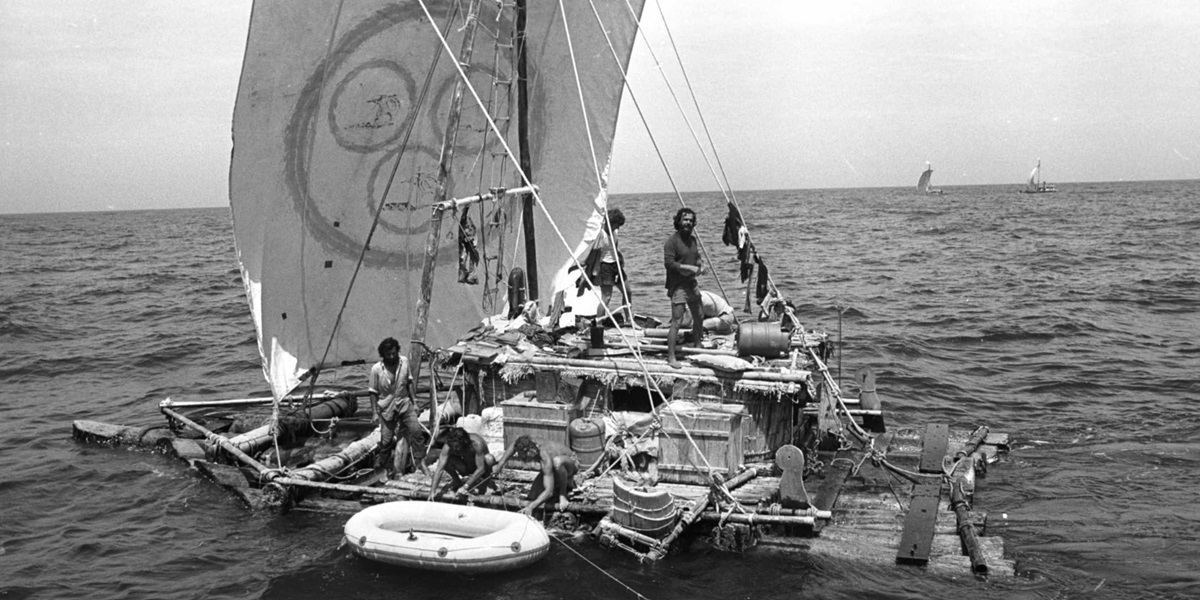 The Las Balsas Expedition – an exciting tale of adventure on the high seas.

We have the only surviving raft on display as well as many original items from the voyage.

On May 27, 1973, three balsa rafts left Guayaquil, Ecuador to head across the Pacific Ocean bound for Australia, 8,600 miles (13,840 km) to the west.  Each raft would be home to 4 men, their provisions, and a small collection of pet monkeys, parrots, and kittens. Their aimed destination was Mooloolaba, 50 miles (80.5 km) north of Brisbane.

The leader of the expedition, Vital Alsar had already made one unsuccessful attempt in 1966, and undaunted had set out again in 1970 and had reached Australia in 161 days. This time it was to be a convoy of three rafts and 12 men of 7 nationalities.

The rafts were made from specific balsa logs – the had to be from “female” balsa trees and felled during the full moon. This was due to the full moon being the time when the sap content was highest in these specific trees. The more sap in the logs, the less likely they would become water logged on the ocean.

The rafts measured 46 feet (8m) long and 18 feet (5.5m)wide. Nine balsa logs, each 2 feet in diameter were lashed together by wooden pegs and sisal ropes. No wires, screws or metal of any sort was used and the craft were basically just as those that had been discovered by Spanish explorers along the west coast of South America in 1526.

They had large square sails and were steered with vertical planks called guaras located on the bow and stern which allowed for exceptional lateral balance and control under sail. The art on the sails depict the 3 rafts inside a blazing sun.

They took as many provisions with them as they could but would eventually have to rely largely on what they could catch from the sea. The canned food they took eventually had to be discarded overboard as the tins became contaminated due to rust. They only fished for what they needed at any one time, sharing large fish between the 3 rafts. They used saltwater for cooking and dried salted fish in the sum for snacks.

The final destination was to be Mooloolaba but strong southerly currents carried the rafts down the coast. After 178 days at sea the rafts were showing definite wear and tear, the HMAS Labuan followed the rafts south of Brisbane to the Port of Ballina where two trawlers helped two of the rafts, the Mooloolaba and the Aztlan, into the Richmond River. The third raft, the Guayaquil, was deemed too water logged to endure the strain of being towed and was cut loose. This raft drifted to Newcastle and was ultimately destroyed by vandals who set fire to it.

It was on Wednesday, November 21st, 1973, the 12 man crew of the Las Balsas Expedition landed in Ballina. Many locals and visitors to our area recall the wonderful welcome and return to terra firma of these extraordinary adventurers.

The raft we have in our museum has been recreated from the best parts of the Mooloolaba and Aztlan and are completely original.